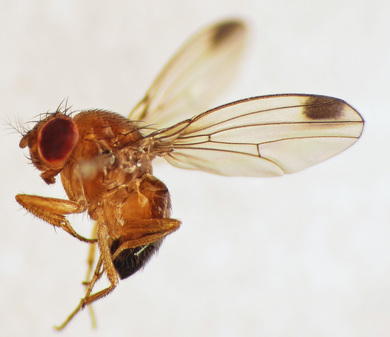 Male Drosophila suzukii. CC Wikimedia
Evolution of an Invasive Species. Biological invaders can be a global problem as they negatively impact economic markets and ecosystems. Within a few generations of establishment some non-native species have been found to persist and adapt to novel environments, exhibit increased growth rates, and acquire behavioral traits that promote their invasion success. Drosophila suzukii (SWD) is such an invader. It is a world-wide agricultural pest and has also emerged as a model species to study the evolution of invasiveness. The fellowship research aims to identify the evolutionary mechanisms that have enabled SWD to invade and adapt to the mosaic of ecosystems found in Hawaiʻi. Activities include a survey of SWD populations throughout the major Hawaiian Islands and genome sequencing. Elucidating the mechanisms that drive a biological invasion increases fundamental understanding of the genetic processes that promote the persistence of immigrant species and may promise approaches to mitigate the invasion. Link to my NSF award here.

Check out our research group at the University of Hawai'i at Hilo. 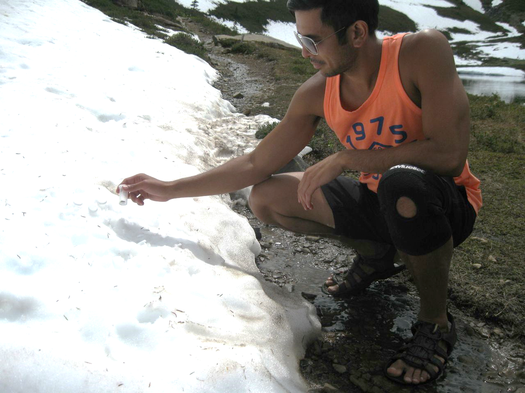 Chilling a bee on snow to sample DNA near in Olympic National Park.
Landscape Genetics. Illuminating the relationship between environmental variation and the distribution of genetic diversity is an underlying goal of biodiversity studies. As part of my dissertation I studied the population genetic diversity and structure of bumble bees distributed in the Pacific Northwest. My results found  that genetic diversity and differentiation are largely determined by a species' distribution. Species limited to high elevation habitats  exhibit significant pair-wise genetic differentiation across geographic distance, specifically the Forest Bumble Bee, Bombus sylvicola. Whereas, bumble bee populations that are broadly distributed across an elevation gradient like Yellow Head Bumble Bee, B. flavifrons,  and the Black Tail Bumble Bee, B. melanopygus, do not exhibit significant pair-wise genetic differentiation.  The results of this study are published in a special issue of Conservation Genetics.

Read our paper here. Support for this research was provided in part by the North Coast and Cascades Science Learning Network and the Utah State University Ecology Center. 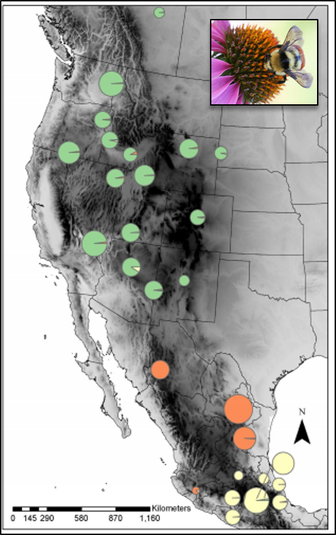 Population genetic structure of the Hunt bumble bee.
Wild population genetics of a commercially viable pollinator. Bumble bees contribute significantly to crop pollination worldwide, second only to the European honey bee. However, since the collapse of commercial Bombus occidentalis populations due to pathogen outbreaks in rearing facilities, western North America has been without a commercially available native bumble bee pollinator. In collaboration with Rémy Vandeme (in addition to my adviser, Jamie Strange), I explore wild population genetic diversity and niche of the commercially viable bumble bee, B. huntii. Three genetic clusters across the range of B. huntii: a USA-Canada cluster, a North Mexico cluster, and a South Mexico cluster. Genetic distance was correlated with geographic distance among the two Mexican clusters, but not in the USA/northern-Mexico cluster. Ecologically, the Mexico populations inhabit a distinct niche relative to USA and Canada populations. The data show significant structuring of B. huntii populations in Mexico, but not in the USA/Canada. Based on these results, the movement of B. huntii populations has the potential to introduce novel genetic material that may impact the evolutionary heritage and disease ecology of locally adapted B. huntii populations.

<- Individual based population assignment of B. huntii across sampling sites in North America. The size of the pie-charts represents the amount of individuals genotyped at each site. The colors of each each pie-chart represents the average probability of assignment (individuals within the sampling site) to 1 of 3 populations of B. huntii. Pop1 = Green, Pop2 = Yellow, Pop3 = Orange. 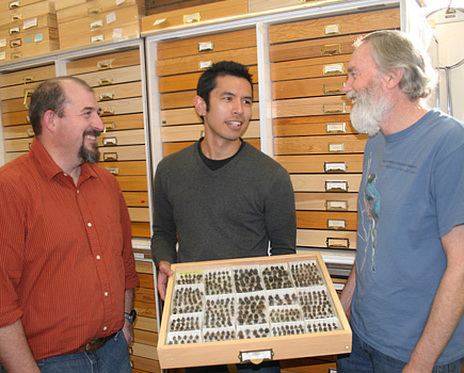 Talking about bumble bees with Dr. Jamie Strange and Dr. Terry Griswold in the U.S. National Pollinating Insect Collection in Logan, UT
Natural History Collections and Biodiversity. Natural history collections (NHCs) are rich repositories that document our planet's ecosystems, both past and present. NHCs can be found in small town Idaho and in the bustling metropolis of New York City. Within the past decade there has been a surge to revisit NHCs to digitize specimens. In the case of the humble bumble bees, NHCs have informed the extent of their decline throughout North America, which turn translated into conservation action at local and national levels. While NHCs are reflections of our past, they have also proven to be windows into our future. An ongoing theme in my research program is to explore ways we can utilize specimens from NHCs to answer questions pertain to the evolution, ecology, and conservation status of insects.